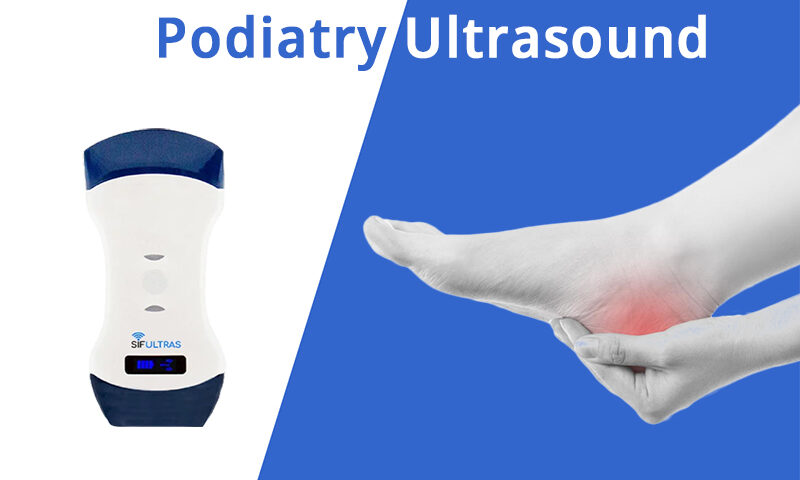 Either it is a medical or a surgical treatment, the use of an ultrasound scanner in the podiatry domain is preferred in order to better visualise and identify the pathology, and hence make accurate decisions in patient management.

Why Is Using An Ultrasound Scanner Important In A Podiatry Practice?

In a podiatry practice, having an ultrasound machine is considered as a real asset for numerous reasons.

To start with, a high end ultrasound scanner such as the Color Double Head Wireless Ultrasound Scanner SIFULTRAS-5.42 FDA  will provide you with an image quality that facilitates the diagnosis of the pathology. The high-resolution imaging of the structures in the foot and ankle provides a significant amount of diagnostic information that involves all structures of the lower extremity including muscles, tendons, ligaments, and bones.

Also, a podiatry ultrasound probe enables the clinician to effectively diagnose and treat patients without the need for a referral. Indeed, in-office ultrasound provides immediate imaging and the possibility to spot occult pathologies during a typical office encounter without the need to refer patients for an MRI. Having a high frequency ultrasound such as the SIFULTRAS-5.42 in a podiatry practice will benefit both the clinician and the patient, time and budget wise.

Furthermore, diagnostic ultrasound is a point-of-care modality that provides non-invasive imaging of the soft tissue and the cortical surface of the bone as a means to detect any pathology and treat it straight away.

What Ultrasound Probe Is The Most Suitable For A Podiatry Practice?

In podiatric medicine, most of the structures in the foot and ankle are considered to be superficial. However, sometimes it is needed to go beyond the muscle to see the cortical surface of the bone. That is why, the Color Double Head Wireless Ultrasound Scanner SIFULTRAS-5.42 FDA is the most suitable device for a podiatry practice, for it combines both a linear probe for superficial imaging and a convex probe for more in depth imaging.
Different Uses of Ultrasound Scanner In a Podiatry Practice:
The images provided by the ultrasound scanner can be described by evaluating the soft tissue in terms of color (mainly shades of grey):

As a matter of fact, the images or structures provided within the ultrasound image can also be described as having homogeneous or heterogeneous patterns.

The SIFULTRAS-5.42 is excellent for imaging muscles. Its ability to evaluate tendons is far superior to MRI when performed by an experienced practitioner. The ability to follow the course of the tendon is not limited to simple slices, yet it provides continuous evaluation of the structures in real time.
When evaluating for ligament injuries, high-resolution ultrasound provides better images than almost any other imaging modality.

The SIFULTRAAS-5.42 can also be used to image blood vessels. Thanks to its color Doppler, it can evaluate blood flow within the vessels or lack thereof.

Ultrasound imaging of bone provides a view of the outer contour of bone. One can clearly evaluate the cortical surface. However  ultrasound cannot penetrate bone, it casts what is called an acoustic shadow. Since the sound waves are blocked, the image will appear black below the cortical surface.

Was this article helpful?

This article does not have the information I am looking for

How can we improve it?

We appreciate your helpful feedback!

Your answer will be used to improve our content. The more feedback you give us, the better our pages can be.