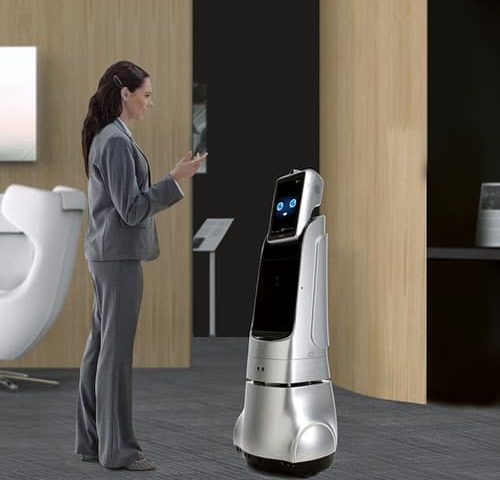 Telepresence robots make meetings a whole lot better by ensuring that everyone who is supposed to be there are present, even if they are physically not.

Telepresence robots can help your team members feel like you are part of the meeting by allowing you to easily interact with them. When it comes to presentations, you can see what everyone else can see.

If you have a mentoring relationship with another employee, then a telepresence robot can help you with that as well.

Well, the Telepresence robot SIFROBOT-4.3.Independently explores every room. When you place the SIFROBOT-4.3 in a new room or office, it will explore it by itself, taking note of the layout of the place so that it would know where to go in the future.

This feature is helpful because it allows the SIFROBOT-4.3  to map out the room for you instead of visually finding its way every time you need it. It gets to where you want it faster and more efficiently.

Facial recognition. The SIFROBOT-4.3 can identify faces. This is very useful when you are interacting with people. It also allows the robot to instantly find your face and turn towards you.

Say, “come here” and the SIFROBOT-4.3 will make its way to you, do some real time facial recognition magic, and even follow you around. This works even when there are other people in the room.

It has the ability to know all the professional terminology and jargon that you use in your own industry or department, allowing it to understand you better.

Remote video surveillance: You can use your smartphone to remotely control the SIFROBOT-4.3. This means that you can be halfway across the world and still keep an eye out for things at home, even talk to a family member or play with your kids.

Smart home control: The SIFROBOT-4.3 can help you control your smart home. It could turn off the lights and turn on the air conditioning, among other things.

The design: The Telepresence robot SIFROBOT-4.3 is made of acrylonitrile butadiene styrene plastic, a very strong and rigid plastic that is also highly insulated and glossy. In short, the material used is not only built to last but also contributes to the beautiful design.

Voice control: With the SIFROBOT-4.3, you do not have to always tinker with your smartphone or some sort of physical control. You can just issue voice commands and it will pick up on what you said even when you are across the room.

Far field speech recognition: The SIFROBOT-4.3 can identify your voice even when you are at the opposite end of the room. That means you can issue commands even if you do not go near the robot.

This is very similar to the far field voice recognition technology used by Amazon’s Alexa devices such as the Amazon Echo, Amazon Dot, and Amazon Echo Show.

It does not matter if the TV is on and the kids are fighting, Amazon Echo can still recognize your voice command if you use the Alexa pass phrase. Long battery life. The SIFROBOT-4.3 needs only six hours of charging time and this will be enough to have it on standby for 40 hours.

Yes, with only six hours of charging, the telepresence robot will be ready to work for you for two days. Actual running time is pegged at 10 hours, giving it enough power for a typical work day.

With SIFROBOT-4.3, you can use the telepresence robot to explore unknown environments because of its autonomous indoor navigation.

And because it has custom content at its fingertips, you can “train” the Telepresence robot SIFROBOT-4.3 for just about any situation. For instance, you can use it to guide guests at your bed and breakfast and lead them to their rooms.

Or perhaps use it to tell guests about the exhibits and paintings in a museum. You can also use it to safeguard your kids or your home. You can also use your robot to hold or attend a video conference with your business partners even when you are on a vacation halfway across the world.

And here’s the thing, the SIFROBOT-4.3 has advanced processing. It can understand the nuances of spoken languages and be able to answer questions on its own. This means that you can put the Telepresence robot SIFROBOT-4.3 at your front desks and welcome people into your business establishment.

Also, a single charge can power the SIFROBOT-4.3 for 10 hours of continuous operation.

That means that it can keep up with your hectic schedule at the office and attend one business meeting after another and still have enough energy for some after-work monitoring and surveillance before it needs to go back to its charging dock.

The SIFROBOT-4.3 may be used for home and family purposes, such as turning off the lights at home when nobody is around and playing with your kids or letting them feel your presence even when you are out of the house.

The Telepresence robot SIFROBOT-4.3 is being marketed more as a butler rather than just a mere telepresence robot. It does more than just attend meetings for you, but it can do other things just as well, even when you are not there to supervise it.

Was this article helpful?

This article does not have the information I am looking for

How can we improve it?

We appreciate your helpful feedback!

Your answer will be used to improve our content. The more feedback you give us, the better our pages can be.